Evan Puissegur is eighteen years old now, just graduated and headed off to college at the University of Louisiana at Lafayette. Having endured a lifetime of surgeries, he’s matured into a confident young man and is happy to offer advice for families of children who like him were born with cleft lip and palate.

Like most parents of infants born with cleft lip, the Puissegurs great joy brought more than just the usual uncertainty that young parents face. “When he was born, we had no idea he was going to have any clefting issues,” Kim Puissegur tells us. “He came out and there it was, and it was like ‘Holy Moly,” what do we do? How do we deal with this little infant?”

“But Lo’ and behold somebody had a plan,” she says, “because Oschner’s craniofacial team is excellent, and Dr. St. Hilaire, who was one of the plastic surgeons on the team… he was the best thing we could ever have asked for.”

Confidence and Kids Born with Cleft Lip and Palate

We met Evan and Kim at the Mandeville Lakefront on Lake Pontchartrain in Louisiana, and the photoshoot was a breeze. Evan is a natural in front of the camera, as it turns out. And his parents are justifiably proud of the man he’s become.

“We had the last craniofacial meeting in January,” she says. “The doctors saw him and were in awe of how good he looked and the progress he has made. They gave us the adios and see ya later, thanks, and we are anxiously awaiting the braces to come off so he can put this behind him and go off to college.”

Of course, this is the third set of braces Evan has had. As is common for families of children born with cleft lip and palate, his childhood was full of surgeries and doctors’ appointments. Each individual child’s course of treatment mirrors that particular child’s development, which in turn drives an individualized timeline.

As Kim put it, “He’s been dealing with surgeries since he was an infant, so we are talking about 18 years of a journey that is finally over.” 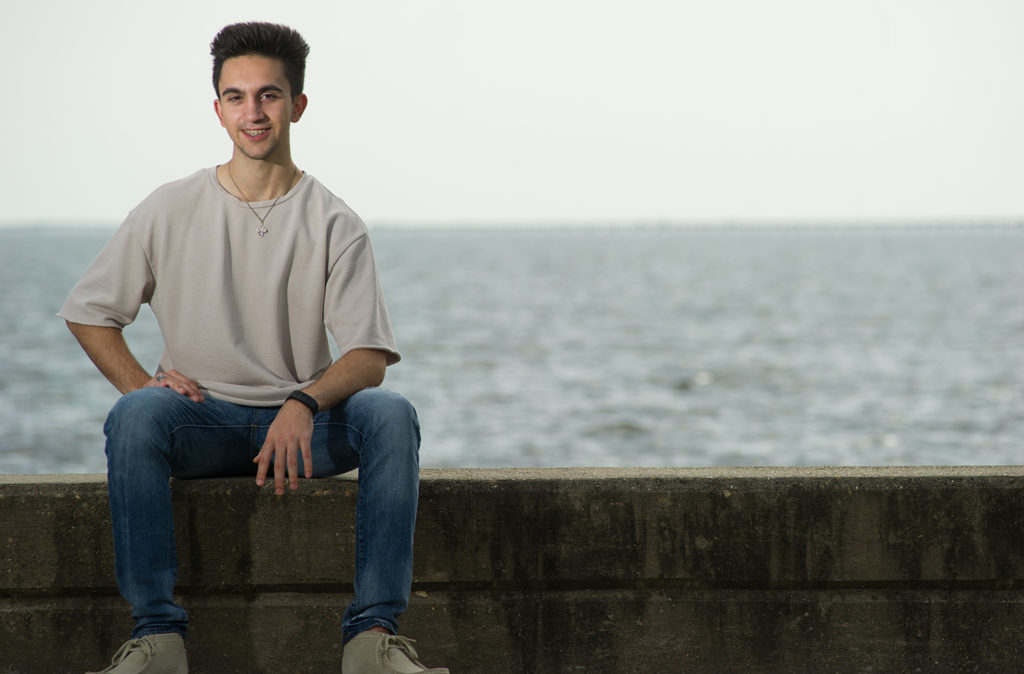 There was a period of time when it was more difficult to ignore the facial differences that cleft lip and palate create:

“Honestly, I didn’t notice any of my differences until about 8th grade, because before that I was just a kid. I was just living. I never really cared about the difference of my jaw or my nose until Junior High, when everyone had phones and social media and now and I’ve got to take a picture…”

Kim reminds him that when he was younger he used to say, “’So what if I’m different, I am okay.’ He’s always had confidence,” she says proudly, “but now he’s radiating confidence.”

“Every day, I just tried to do my best at whatever I was doing,” Evan agrees.

“Sports were my outlet as a child. I hung out with friends and played sports – football, basketball, volleyball, track – and just tried to keep a positive mindset, knowing that one day everything would be okay.”

That’s Evan’s recommendation for families of children born with cleft lip and palate: “It’s a process, and you have to deal with it day by day, but there’s a light – a big light – at the end of the tunnel.”

As for sports, children born with clefting issues can play sports without limitations, so long as they have the proper instruction and the necessary gear in order to protect his or her mouth (including special mouth guards – talk to your doctor about the proper equipment for your child’s chosen sport).

Over the years Evan got very good at being a patient. When it came to his final surgeries, he knew how to advocate for the result he wanted. As Kim put it: “Evan was very adamant about who he did like and who he didn’t like.”

These were the last two surgeries – major surgeries – final jaw surgery followed by cosmetic reconstruction of his nose. Evan stresses the importance of choosing an oral surgeon that made him feel confident and with whom he could communicate.

“The first doctor we went to was an oral surgeon, and just the way he presented the plan to me I didn’t feel a good connection with him. He seemed too old-school. One of the things I am so thankful for, one of the things Dr. St. Hilaire was able to do was cut around my nerve. The other guy was going to cut right through it, so I would have lost sensation for months.”

Dr. Hugo St. Hilaire and his team use the most advanced technologies in planning, and in simulating Evan’s surgery it became clear that in order to heal, Evan’s mouth would have to be wired shut (for 32 days, as it turned out). For this reason, the surgery was scheduled for summer, so that he wouldn’t have to miss any school.

“We met with Dr. St. Hilaire and everything fell into place,” Kim says. “He was personable, cordial, easy to get along with, and the game plan he presented put all of us at ease. Evan just had so much faith in their rapport that even knowing he was going to be wired shut, it was okay.”

Life After Cleft Lip and Palate

When Dr. St. Hilaire asked him about his goals, Evan had a ready answer: “I want to look good!”

“I always felt that I had the potential to be a good looking guy,” Evan says, “But for whatever reason, it wasn’t in God’s plan right off the bat.”

Today, though, he’s happy to sit and/or strut in front of the camera. On his arm, we notice a tattoo: G>^V which means “God is Greater than the Highs and Lows,” and one gets the sense that his confidence is grounded in an unshakable faith.

Ask him what he is looking forward to most, however, and he gives the response you’d expect from any young man. “I am just ready to get the braces off…” he says.

We believe in team care, in prioritizing the health and future well-being of each patient according to the specific needs of that individual, and we are proud to work with and recommend only doctors and nurses whom we know and trust.