We’re sitting in a café in the Woodbine neighborhood of Nashville — not far from the home of  Shaneka McCarter and her boyfriend — enjoying a cup of tea on a cold day in October.

Just a few months ago, in late February 2017, Shaneka and two friends traveled from home in Nashville to Baton Rouge, Louisiana to visit a friend’s father. By a stroke of luck, it just so happened that their plans coincided with Mardis Gras weekend.

On their first day in town, the three friends made a trip to nearby New Orleans, saw the sites, visited Bourbon Street, and enjoyed the festivities. They heard all about the legendary Mardis Gras parades and decided they couldn’t resist coming down from Baton Rouge again the next day to see the fanfare.

But the following morning, while sitting in traffic on their way into the city, a driver rear-ended their two-door Altima coupe, propelling it into the vehicle in front of them. In an instant, they become part of a four-car pile-up.

Shaneka, who was in the back seat, has no memory of the collision. For her, time leaps from waiting in a traffic jam to waking up in the emergency room at University Medical Center.

Facial and Jaw Injuries From a Car Accident

Shaneka’s two friends suffered minor concussions and seatbelt burns, but Shaneka’s injuries were far more severe: Her upper and lower jaws were crushed. Her face and forehead were fractured in more than 15 places, causing peril to her nose, teeth, and eyes.

In fact, Shaneka’s facial skeleton was so damaged by the impact during the accident that, in the self-portrait she showed me on her phone from the day of the crash, her lips were too swollen to close, revealing a single front tooth. Her nose was visibly broken, and the right side of her face, including her eye, was sunken down, like a clock-face in a Dali painting.

“I didn’t know what was happening. They told me, ‘you were in a car wreck’… I really didn’t know how harsh my injuries were.” But she wasn’t scared: “It was so surreal, I was just going with the flow. I just took it all in and was just praying for the best.”

That’s when Shaneka met Dr. Gerhard “Sol” Mundinger, a plastic surgeon at LSU. He lead the analysis of Shaneka’s injuries, and the reconstructive surgery that lead to her recovery.

What is Post-Traumatic Facial Reconstructive Surgery?

Craniomaxillofacial trauma, or trauma of the skull and face, often causes complex bone and tissue injuries requiring immediate and expert attention in order to diagnose, treat, and ensure the best recovery possible.

In post-trauma reconstruction, the New Orleans Craniofacial team employs the latest diagnostic and surgical tools, including techniques like Virtual Surgical Planning® and technology for preoperative surgical planning technology, such as high-resolution CT scanners and three-dimensional CT formatting, to help our team help our team diagnose and define a course of care for craniomaxillofacial injuries.

Surgical care is generally carried out once the patient is in stable condition in the hospital. At that point, once the team has stabilized a patient’s fractures and reduced any movement of the affected bones, pain from these fractures will be relatively minimal. During the surgery, access incisions may be made in the mouth, eyelid, or brow, or hairline depending on the locations of the fractures.

Recovery time can vary depending on the nature and extent of the injuries, but your surgical team will consult closely with you on post-surgical instructions and follow-up care.

“I was in the hospital for a few days before the operation. My surgery ended up being twelve hours long. After I woke up, Dr. Mundinger came in and explained everything.”

Everything had gone wonderfully: Dr. Mundinger had aligned and wired the broken pieces of Shaneka’s jaws back together, corrected her orbital shape, and paid careful attention to reconstructing the soft tissues on her face.

Because her jaws were so badly damaged, he determined it would be necessary to keep her upper and lower jaw wired together for a few weeks to ensure her teeth, which had been severely displaced, healed in the best possible position.

After the surgery, Shaneka recovered in the hospital for several days, then returned home with special instructions for care and eating during the period her jaw would be wired shut to heal. She traveled back to New Orleans twice, a few weeks apart, for two follow-up appointments on site with Dr. Mundinger,

Finally, she had an additional minor procedure in which she had her wires removed. “That was kinda quick,” she recalled. “They gave me medicine to sleep. It didn’t hurt, and it was over in about fifteen minutes.”

But the recovery would take longer.

“One of my eyes was pushed back more than the other. Dr. Mundinger told me that if I had vision problems, I’d need another surgery. Luckily, that didn’t happen.” Shaneka thought it would take much longer to recover, but in all, she said, it was about a month and a half.

Shaneka’s healing process called for eating liquified food via a syringe during the six weeks following the surgery, during the time that her jaw was wired shut.

“Dr. Mundinger told me it would be six months to a year before I could open my mouth wide. After getting the wires removed, my mouth was so numb, I had to learn how to chew all over again.”

Gradually, she graduated from small soft food to harder-to-chew food while rebuilding her jaw muscles.  “I started getting the hang of it after about three weeks,” she said. “It took me a few weeks to move up from things like mashed potatoes to meats.”

During the period that Shaneka’s jaws were healing, she lost twelve pounds — and between the weight loss and her healing face, she didn’t quite feel like herself. 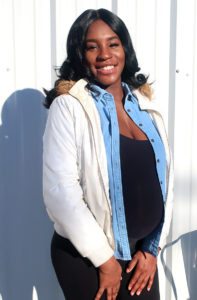 “I did have some insecurity issues because I didn’t think I would look like I used to. At first, I felt like I looked different. I couldn’t see it at first. But as I started progressing I started feeling like myself again. Some people even say I look better!”

In some ways, that may be true: The skeletal and jaw reconstruction Shaneka underwent after the accident not only saved Shaneka’s teeth, but even served to correct an underbite Shaneka had had before the accident.

“Some people, they have those wrecks and tell me everything changed for them. I only had some injuries, and they fixed everything. I tell Dr. Mundinger every time I talk to him, ‘Y’all are amazing.'”

“People ask me, ‘Are you afraid to drive? Would you go back to New Orleans?’ Yeah, I’d go back! If something like this is gonna happen, it’s gonna happen no matter where I’m at. It’s not gonna stop me from living me life.”

One of Shaneka’s family members who was savvy on social media shared a photo of her, and invited prayers from family and friends. She said those prayers helped her get through it, along with the incredible support of her mother and sisters, and of her boyfriend, who took care of her while her jaw was wired, and throughout her recovery.

Now, she tells me, she and her boyfriend are expecting their first child — with a due date right around Christmas.

We believe in team care, in prioritizing the health and future well-being of each patient according to the specific needs of that individual, and we are proud to work with and recommend only doctors and nurses whom we know and trust.